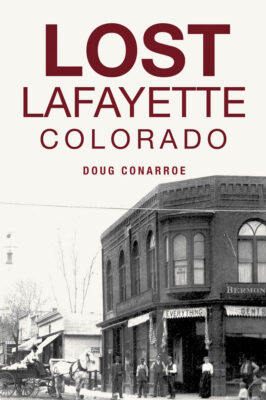 Lost Lafayette, Colorado, published in 2021, is available at the Lafayette Miners Museum at 108 E. Simpson. Best to check hours of operation before you head that way. 303-665-7030

Lafayette has had its share of “firsts.” The Lafayette Interurban power plant, opened in 1906, supplied electricity to one of the nation’s first distributed power grids, and the nation’s first transcontinental phone lines, installed in 1914, traveled right through the middle of town.

Between 1849 and 1870, California goldseekers — followed by the grand Concord Coaches of the Overland Express and Mail Co. — traveled the Cherokee Trail, an ancient north-south trading route overlapped today by U.S. Highway 287.

Researched and written over a 3-year period by Lafayette resident Doug Conarroe, “80026: An illustrated history of Lafayette, Colo. – 1829-1929” provides an updated perspective on Lafayette’s and East Boulder County’s intriguing history, including:

• An explanation of sacred Native American trails in the Lafayette area.

• How DeLafayette (who preferred the nickname “Lafe”) and Mary Miller’s early foray into saloon ownership influenced their lives and the founding of the town of Lafayette in 1888.

• Updated information on the small-scale Dutch Colony craft brick works, a horse-powered enterprise that operated for a few years on the east side of town.

• The labor tensions surrounding the false imprisonment of the Diaz Family during the 1910-1914 “Long Strike.”

• The interesting life of the suave and charismatic E.E. Shumway, who founded the Rocky Mountain Fuel Company.

• Information about “The Silver Brick Case,” wherein a Lafayette-area property owner presented a 100-ounce silver brick at the Philadelphia Mint and demanded that it be made into silver dollars.

• The influence of national temperance leaders John B. Gough and John B. Finch on town founder Mary Miller.

• Why nearby neighbor Louisville is pronounced “Lewisville.”

Other books published by the Conarroe Family: