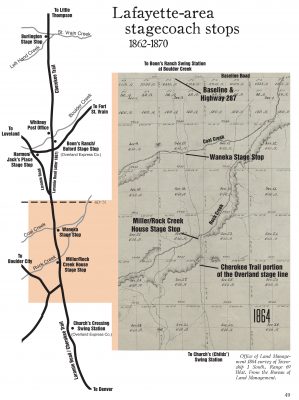 From 1862 until 1870, settlers dotting the prairie north of Denver and along Colorado’s Front Range were treated to a technological marvel known as the stagecoach. At the time, witnessing a bright red Abbot Downing Concord Coach gliding over the open grasslands with a driver at the reins, a messenger by his side guarding the strong box, and up to 12 passengers being pulled by six powerful horses was akin to witnessing the Orient Express chug its way out of the Constantinople train station.

Concord stagecoaches were built in Concord, New Hampshire, and featured large, oak wagon wheels and a rounded passenger compartment suspended on multi-layered ox-hide straps. Side windows were open, with cloth or canvas curtains that could be rolled down in bad weather. The interior featured three upholstered bench seats. Passengers were allowed 21 pounds of luggage.

The U.S. Government sponsored the first wagon transport of mail, known as the “Hockaday Line,” through the Great American Desert in 1848, a 1,200 mile journey over what was called the Overland Route from Independence, Missouri to Salt Lake City. From Independence, the route went northwest to Atchison, Kansas, then to Fort Kearney, Nebraska, then to Fort Laramie in southeast Wyoming, then along the North Platte River to Bridger’s Pass and Fort Bridger in southwest Wyoming, then to Salt Lake. Ten years later, stagecoaches started hauling both mail and passengers along the route.

In 1861, entrepreneur Ben Holladay won the U.S. Postal Service’s Missouri to Salt Lake City mail-hauling contract and launched the Overland Stage Line, which later became the Overland Mail and Express Company. In 1862, an alliance of Arapaho and Sioux forced Holladay’s stagecoaches southward from the Overland Route to what would be termed the Southern Overland Route (and, later, the Overland Trail Denver Loop).

Starting in 1864, stagecoaches turned south at Fort Kearney, then followed the South Platte River to Denver. From there, the stagecoaches picked up the Cherokee Trail/Laramie Road, the main north-south dirt roadway. Two years before the major route change, a Nov. 1862 Rocky Mountain News story detailed a stagecoach journey from Denver to Salt Lake City. “We cannot close this article without a passing tribute to the admirable condition and excellent management of Ben Holladay’s Overland Stage Line. When it is remembered that during the last summer an entire new and before untravelled road was opened from this city (Denver) through Bridger’s Pass,” stated the article.

From 1864 to 1868, the Cherokee Trail/Laramie Road was a principal travel corridor to the west and a key part of the Overland Mail and Express Co.’s 1,000-mile route, which originated in Atchison. The Front Range portion of the Southern Route went north from Denver to LaPorte and Virginia Dale where the trail rejoined the Central Overland Route in Laramie.

The Overland Mail and Express Co.’s 600-mile Denver to Salt Lake City Division was composed of 46 stage stations spaced every 10 to 15 miles. Station operators grew and cut hay and stored grain for Ben Holladay’s 1,700 stagecoach horses and mules. The stage would pull into the station and the operator would swap the worn out horses for fresh ones. Horses and mules were swapped every 10 to 15 miles depending on terrain and weather conditions. Stagecoaches averaged 60 to 100 miles a day and stage drivers preferred mules because of their stamina and strength when navigating sandy creek bottoms.

Home stations and division stations served food, while the smaller swing stations were all about the livestock. This meant that the swing station operator was on call for a stage arriving at late hours. Stagecoaches left Denver and Salt Lake City every 10 hours and wheeled along the trail 24 hours a day, regardless of weather. Overland Express Co. stagecoaches did not make overnight stops, so passengers slept the best they could over the rough terrain. The stagecoach driver often seat-belted himself to the driver’s seat, the “box,” which enabled him to sleep as long as 45 minutes while driving.

Many Overland Express Co. home and division stations had overnight accommodations, but a passenger disembarking the stagecoach for a clean bed had no guarantee of getting on any following stagecoach. Stagecoaches heading west from Denver almost always had waiting lists.

From 1866 to 1871, Lafayette and Mary Miller operated the Miller Tavern Ranch, a saloon and stage stop at the former Stearns Dairy north of Dillon Road on U.S. 287, today known as the Rock Creek Farm.

The Mason & Ganow stagecoach company launched on Oct. 17, 1868, to compete with Wells Fargo and promoted daily overnight service from Denver to Cheyenne, about 100 miles. Heading north, the stagecoach left Denver at 8 a.m. and arrived in Cheyenne at 7 a.m. the next morning. Traveling south, the stagecoach left Cheyenne at 6 p.m.
Lafayette pioneers Adolf and Anna Waneka ran the two-story stage stop on Coal Creek located where today’s U.S. 287 crosses Coal Creek in Lafayette but it, too, was a meal stop and not a swing station.

Manning worked part of the year as a gold and silver miner, and also drove his Hariman & Harmon’s Co. stagecoach between Denver and Central City. Harmons and their five children, Katie, Nellie, Wilson (Will), Frank and Guy, occupied the stage stop from 1862 to about 1868. They moved to Boulder around 1868 and then to the pre-Lafayette area a few years later.

At the behest of Boulder Creek petitioners John Rothrock and Robert Flormann, on April 1, 1867, the Boulder County Commissioners officially moved the Laramie Road (Cherokee Trail) — which veered northwest from Lafayette past White Rock and toward Niwot — two miles east so that it went straight north from Lafayette and followed the established stage road on 109th Street (9 miles east of Boulder).

Ben Holladay’s Overland Mail and Express Co. was sold to Wells, Fargo & Company in 1866 for $1.8 million in cash and stocks. After the Transcontinental Railroad was completed to Cheyenne in 1867, stagecoach travel declined, and the majority of stagecoaches heading from Denver to Cheyenne carried passengers looking to catch an eastbound train.