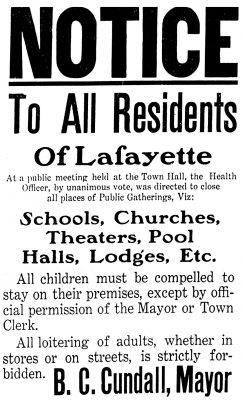 The Spanish influenza epidemic of 1918 was swift and deadly, taking residents young and old. On October 11, Lafayette Mayor B.C. Cundall declared a moratorium on public gatherings and ordered the closing of fraternal lodges, schools, churches, pool halls and theaters. Children were required to stay home, but could travel with a permit issued by the city clerk.

Lafayette Leader editor B.J. Redford suspended publication of the weekly newspaper from Nov. 8 to Dec. 6 — he, too had contracted the flu and was too ill to publish the newspaper. Redford reported nine deaths due to the flu, including 2-year-old Thomas Burt and 79-year-old Samuel Abernathy.

The quarantine was lifted Dec. 20, 1918. During the epidemic the makeshift hospital at the Congregational Church at Gough and Simpson, now the Mary Miller Theater, had treated 90 patients.